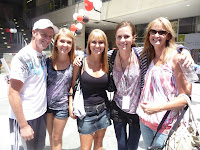 A family from Fresno who reads the blog. Fun meeting you all at the Verizon in-store event 3785 Wilshire Blvd in Los Angeles.

Today’s concert really provided me with about a week’s worth of blog topics. There will be more blogs in the fall, when the concerts are over so I can explore all of these ideas. People I met, things I felt and observed, and really appreciating the richness of life when I allow myself to open and observe all of it.

After laundry and re-packing my suitcase with clothing for the next week or so, Hannah and I headed over to the Verizon in-store event for Honor Society and the Wonder Girls. It was poster signings and handshakes with the bands.

I found an all day parking lot at a church about six blocks from the store. An easy walk along a tree-lined street. I paid the parking lot attendant, an older hispanic man with wrinkles around his eyes that made a permanent smile. I thanked him and he said, “Thank you for coming.”

When he said those simple words I felt an outpouring of love and gratitude. There was a sincerity behind his words that caused me to pause, breathe in that moment and lock eyes with him. I nodded and smiled. In that simple moment, I was reminded of the impact we can have on one another with something as simple as a few words, a smile, or a wave.

I walked to the store with a spring in my step and joined in the activity that was already in full swing. There was a contest to do the Honor Roll which is a dance to See U in the Dark by the Honor Society. Very few girls were getting up to do the dance so I jumped in and received one of the VIP passes to see the Honor Society. For me, it is such a catchy dance that I “gotta dance” when I hear it.

I went into the Verizon store when it was my turn to meet the Honor Society band. Of course, they know us now, so it is more of a “hey, how’s it going today,” instead of a first time meeting. I told Andrew, the bass player, that I can really feel him connecting to the audience. I have been sitting in the higher seats for the last few shows and when he looks up there, he sends moon beams of love energy. The audience can really feel it. It is really cool to watch how they are each expanding into more and more of who they are. He was appreciative of the feedback. I was sending moonbeams of love to him.

I was joking with the rest of them about how I think I should have a permanent VIP pass for Verizon store events so I can come in at the head of the line and I should have an open meet and greet pass to come and get a picture every couple of concerts. Mike and Jason were like yeah, cool and Alex was confused. It was really precious. He was slowly talking about how I would need a Jonas backstage pass in order to do that and … I was only messing with them, but I think he was really trying to process how to do that. They are sweethearts and it is there time to shine. Lots of talent in that group.

We met a family from Fresno who had come to LA for the concert today (picture above) and they introduced themselves and we got pictures with them. I love these moments of connecting with all of you. One of the guys had a Hurley shirt on (my husband’s name). It is always fun to see that. Like a “hey, how’s it going,” from him.

When we went back to the car, I realized I did not have my phone. Back to the Verizon store. No one had turned in a phone. Another detail!

The Sound Check was really fun. They do a sound check on the equipment and they throw in some fun. This year it is costumes at some of the venues. It was like a Halloween party with turkey, cow, mouse, lots of bears, and dog costumes. Joe was a turkey. Kevin was a mouse. Nick was himself. He does not like to dress up and maintains the right to refuse.

They asked for a volunteer to come up and play guitar with them. She played the guitar and then they autographed it and gave it to her. A group of five people from the audience who were dressed in costume came up to play musical chairs and then it was over. It was fun to be in there with a group of a couple hundred people. It felt intimate in the huge Staples Center. We were all in the section in front of the main center stage. They played BB Good and Video Girl.

When the sound check was over, we were allowed to stay inside the Staples Center in a section of the concourse. I was one of the first people in my seat section when the doors opened. I had a burrito from Comancho kiosk, enough food for two meals.

I was observing the usher in my section. The kindness I felt from the parking lot attendant was continued with the usher throughout the evening. He was attentive and working during the whole show. He talked with the children. He made sure that everyone was comfortable. Once a person was seated, he came back to make sure everything was okay.

He even readjusted a couple of the seats with consent from people. For instance, two girls had seats apart and he asked if people would readjust so the girls could sit together. Another girl was here for her first concert. It was a birthday present from her mother. After a few JB songs, she had her head in her mother’s lap. The usher came over. The lights were in her eyes. The usher arranged things so that two girls a few rows up came down and the girl and her mother went up a few rows.

I have never seen anything like this. He was on-call for our section all night long. It was truly amazing to see this. I am going to see if I can find him tonight to tell him that. It was so loud and confusing when we all left the concert, I never had a chance to find him and tell him how much I appreciated his kindness all night long.

He also loves Michael Jackson and grew up listening to the Jackson Five. He shared how special the Memorial was for Michael. He wears a medallion under his shirt and says that he feels Michael in the Center.

This man is truly a guardian angel of the space he works in every evening. I am grateful and inspired by what I saw and experience last night.