A Journey with Leadership: Part 1

Posted on July 10, 2013 by Andrea Hylen Leave a comment
Day 39 of 100 Days of Blogging
Do you see yourself as a LEADER?
In my experience, we are all leaders. Individually we are the leaders of our lives and we all have the power to influence each other with our choices in life. All leadership.
Reflecting on leadership in the next Heal My Voice project: Voices of Feminine Leadership, I remembered a palpable moment of when I moved from one style of leadership to another.
It was 1974.  I was in the 11th grade at Phoenixville Area High School and I was chosen as the captain of the show flags in the marching band. 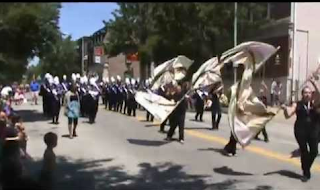 Right before our last parade of the season and before the band camp where I would receive some guidance about show flag routines, the current captain had a family emergency and was not available to lead us in a local parade. I was thrust into leadership with no idea what I was doing! My first thought was to lead like a man using the stereotype of a platoon sergeant in the Army. I yelled at the 12 girls to straighten up, to present their flags with more precision. Stand tall. Straighten up. Sharper moves. Get in line. I was yelling the orders out and I was exhausted by the end of the parade. It wasn’t fun at all. I can remember feeling defeated and unsure of myself wondering why I had been chosen to do this.
At the summer band camp training, I had so much fun learning new routines and marching all day for a week. When our high school band camp started the week before school, I was eager to share the fun with the girls. While the other marching band groups: batons, rifles, and musicians were practicing in their separate groups, I decided to try another approach. Instead of focusing on precision and marching in straight lines, I told them I wanted to share new routines that I learned at the training camp. I focused on having fun, connecting the girls with each other, asking for their ideas.

In the afternoon when all of the groups came together to learn the choreographed moves we would do at every football game intermission that fall season and in competitions with other marching bands, we worked as a team. The show flag girls were connected and focused and filled up from all of the fun in the morning.

It was the first time I could feel the power of working as a team and leading in a way that invited every voice into the circle. Valuing each young woman’s voice and encouraging cooperation, teamwork and collaboration.