Voices of Peace: Gloria Steinem, A Peacemaker and a Feminist 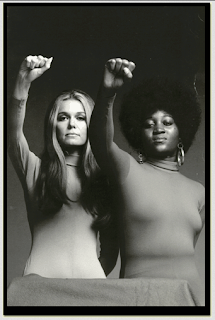 In the Heal My Voice project Harmonic Voices, women are writing a personal story about peace.  One of the women in the project suggested we all write a blog this about people who have inspired us on our peaceful path.

I thought about all of the peacemakers who have inspired me. And as I reflected on them another vision of peace came to me:

The willingness to stand up for something that may not look like peace. It may stir up controversy. It may make people uncomfortable. It may put a VOICE to something no one is saying out loud.

Gloria Steinem is a Peacemaker and a Feminist.

When researching more about Gloria Steinem, I discovered that after graduating Phi Beta Kappa from Smith College in 1956, she spent two years in India. She wrote for Indian publications, and was influenced by Gandhian activism.

The influence of Gandhian activism was a thread throughout the women’s movement. No acts of violence. Using words. Writing. Speaking. Vulnerable. Powerful. Standing up!

Was there anger? Yes. When a human being is suppressed from the full expression of who they are, there is anger. It can be stuffed down and turn in to depression or anger can be a powerful igniter of passion and forward movement.

I am a peacemaker and there have been times in my life when anger has moved me to express. When I feel or see injustice or suppression, there is a fire that begins to burn and rumble from deep inside. The burning bypasses the “nice girl, don’t make waves” part of me.

My Voice must be heard!

Gloria Steinem isn’t stuck in the nice girl. She has expanded the women’s movement to celebrate non-violent conflict resolution, the cultures of indigenous peoples, and organization across socioeconomic boundaries.

She writes and speaks and opens doors for us to have conversations, take action and the conversations cultivate peace inside of each of us. When our voices are shut down, there is no peace.

I thank her for leading the way. Refusing to be silent. Putting a voice to injustice.

I know that it has supported my journey to connect deeply with fuller expression of who I am which has led me to experience more inner peace.

I am grateful for the voice of Gloria Steinem in the world and I thank her.

If you want to learn more about Gloria, I have added a list of some of the organizations and projects she founded and participated in over the last 40 years:

In 1972, she co-founded Ms. magazine, and remained one of its editors for fifteen years.

In 1968, she had helped to found New York magazine, where she was a political columnist and wrote feature articles. She has produced a documentary on child abuse for HBO, a feature film about the death penalty for Lifetime

She helped to found the Women’s Action Alliance, a pioneering national information center that specialized in nonsexist, multiracial children’s education.

She also co-founded the Women’s Media Center in 2004. She was also co-founder and serves on the board of Choice USA, a national organization that supports young pro-choice leadership and works to preserve comprehensive sex education in schools.

She was the founding president of the Ms. Foundation for Women, a national multi-racial, multi-issue fund that supports grassroots projects to empower women and girls, and also a founder of its Take Our Daughters to Work Day, a first national day devoted to girls that has now become an institution here and in other countries.

She was a member of the Beyond Racism Initiative, a three-year effort on the part of activists and experts from South Africa, Brazil and the United States to compare the racial patterns of those three countries and to learn cross-nationally.

Now, she is working with the Sophia Smith Collection at Smith College on a project to document the grassroots origins of the U.S. women’s movement.

Parenting magazine selected her for its Lifetime Achievement Award in 1995 for her work in promoting girls’ self-esteem, and Biography magazine listed her as one of the 25 most influential women in America.

In 1993, she was inducted into the National Women’s Hall of Fame in Seneca Falls, New York.

In 1993, her concern with child abuse led her to co-produce and narrate an Emmy Award winning TV documentary for HBO, “Multiple Personalities: The Search for Deadly Memories.” With Rosilyn Heller, she also co-produced an original 1993 TV movie for Lifetime, “Better Off Dead,” which examined the parallel forces that both oppose abortion and support the death penalty.