Tag Archives: Loss of a Child 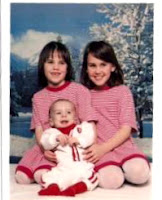 Yesterday was the anniversary of my son’s birthday. If he were still alive, he would have been 22 years old. Hard to imagine that sometimes. He died when he was 19 months old and to think about who he would have become as an adult is so strange when my photos and memories are of an infant~toddler.

Intense time of emotion. The death of a child and the birth of a child. All within a span of two weeks. Years later, it is still one of the most profound moments of my life. It taught me to feel everything. To feel the pain, to find joy in every moment and to open my heart to love and love and love and…