Posted on March 2, 2010 by Andrea Hylen Leave a comment

It took one year to the day to get here. One year ago, on January 26, I left the Freedom Formula Experience in Los Angeles with the intention of flying home to Baltimore and clearing the stuff out of my house. With each room and each step, it became clear that we would sell the house and move to LA.

One year later…Here we are!

We spent the first four nights in Los Angeles at the Wiltern Theater on Wilshire Boulevard with NickJ and the Administration. Arriving in LA and seeing Jonas fans and NickJ as the focus for the week was fun and familiar.

Here is an overview with some of my pictures: 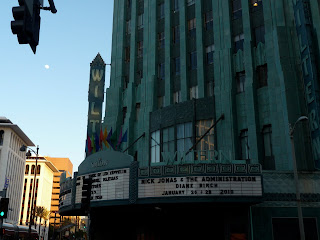 The weather on the first day at the Wiltern Theater on Wilshire Blvd was pouring rain. I was looking for parking when Hannah found the “stalking” spot with a gathering of Jonas fans and asked to be dropped off in the rain.

As I drove around, I saw the Verizon Wireless store where we had danced to the Honor roll dance and had a free meet and greet with the Honor Society in August 2009. Hannah and I won a soundcheck with the Jonas Brothers that day. It was right across the street from the Wiltern . On that fun summer day last August, I had seen the subway area, the Coffee Bean and Tea Leaf on the corner but I hadn’t noticed the Wiltern. Another opportunity to see new things in an area that is becoming more and more familiar.

I met a family in line at the ticket booth. It is always fun to see the looks on people’s faces when they find out I love the Jonas Brothers, too! I am not suffering. I enjoy the music, the concerts and the people who go to the concerts. It’s fun!

I had seats right next to the girls from the ticket line. It was fun singing with them and I enjoyed my new found love of tweeting a few details and pictures during the concerts. There are people all over the world who enjoy the concerts via tweets and videos. Isn’t technology amazing? 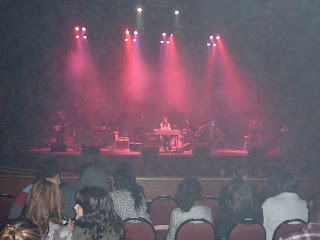 I think these are really good seats. The only challenge is how everyone in LA is so tall! In this section, people were sitting down during Diane Birch’s set, but when they stood up for NickJ, I had to bob and weave to see between people and take pictures. It didn’t stop me from dancing and singing!

Nick had a different look in Los Angeles. The first night I called it casual James Bond. He wore a light brown leather jacket. He has such a sweet smile of happiness in this picture. 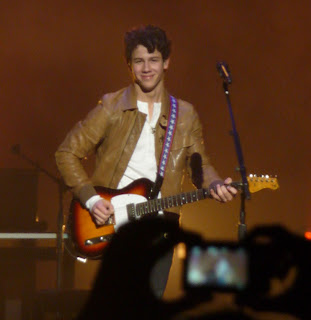 This is another one of the hometowns for the Jonas Brothers. Los Angeles is where they record music and film their show Jonas. They live and play here. There is a sense of comfort and hanging out with their friends and family. It happens in NYC, too.

Every concert is great wherever they are.

Beautiful weather today. I started the one thing I have been dreaming about for months. Long walks in nice weather. Today I walked about 40 blocks. While Hannah waited for the band to arrive, I walked to the bank and took in all of the sights and sounds of the city. I love LA!

Diane Birch is the opening band on this tour. My favorite song is Valentino. High energy dancing with lots of audience interaction. My favorite lines are:

Valentino
My tears don’t show, but oh, honey they flow

Here are two links to this song, if you haven’t heard it.
The first one has the words and the singing: http://www.youtube.com/watch?v=_Hub2jz2OUc

This second one has a ton of newspaper clippings, pictures of Diane and quotes:
http://www.youtube.com/watch?v=PQ29k0ysfEU&feature=related

She loves to take pictures of the audience in the middle of the show and posts them on Twitter. 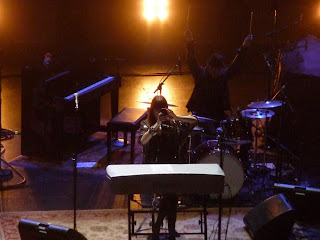 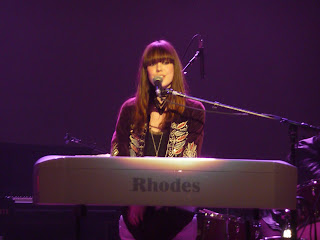 NickJ came on stage with an LA style suit and wearing glasses. After two songs, he was so cute when he told everyone that he didn’t need them, it was for fashion and then took them off. Thanks for keeping it real Nick! 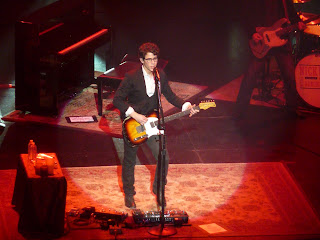 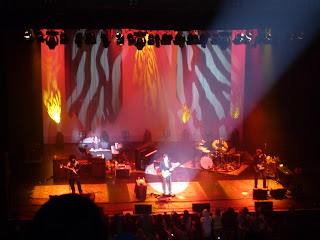 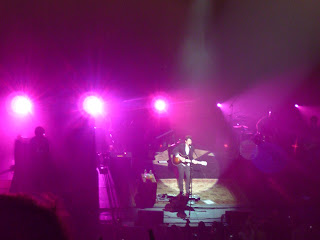 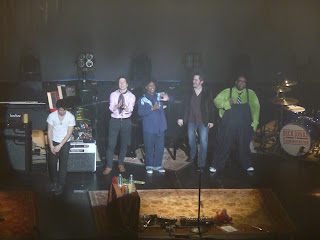 The band is so good. The talent and experience of the band has really made this concerts special. Here is a link to one of the songs to give you a flavor of the difference in the music.
http://www.youtube.com/watch?v=1zumYAr-ub0&feature=related

Hannah and I went to The Jay Leno Show on this day. We arrived at 8am to get in line for stand-by tickets. Hannah received a text from a friend of hers, Blaise, who thought a friend of hers had tickets for both of us. The friend who had the tickets wasn’t there waiting with us in line, yet. There was a lot of waiting around.

Finally around 1:30pm, a group of girls behind us said they had a ticket for me and Hannah got a ticket with Blaise and her friend.  (Sorry to Hannah’s Jonas friend, Daryen for changing the driving plans for today. Still figuring out the driving and logistics in LA)

Learning another part of the LA scene. How to get tickets to TV shows!

When we entered the studio, I felt a little bit like a traitor. I had been on Team Conan during the Conan-Leno craziness! I have to say that Jay Leno is really an amazing performer. He was warm and it really felt authentic. The taping is an hour. It is a live show with no retakes.

I think the Conan-Leno thing was an NBC behind the scenes problem. NBC wanted to lock in Conan and made Jay go to the earlier time period. It was crazy from the beginning 5-7 months ago. Okay, on to the show.

The guests on the show were Massachusetts Congressman Scott Brown, Bill Paxton from Big Love (one of my favorite actors) and finally NickJ and the Administration. I was ushered to a floor seat near the TV show band. Hannah was taken to an area right in front of the stage for Nick Jonas. Once again, I do not fit the “profile” of a Jonas fan. They put me with the group that supposedly didn’t know Nick Jonas. Ha! Ha! If they only knew…

Concert:
I had a really great seat tonight. Level 2, Row 2. There was filming in the venue that evening, so the section to my right had all of the seats removed and a camera with a swinging arm. Maybe they were recording the song, “STAY,” a song Nick wrote while on tour. Here is the version he sang on Jan 27:

Nick wore this suit on the Leno show, too. 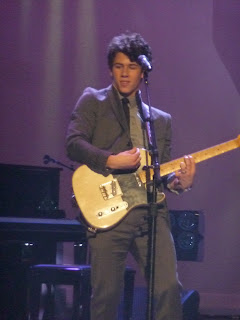 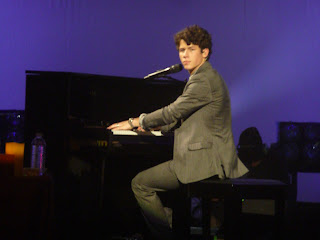 I am immersed in Los Angeles and loving it.

We connected with Daryen (the Jonas fan from Florida) in Manhattan Beach today. She was leaving a hotel there and staying in a hotel in Burbank so she could be part of a group who were interviewing Garbo, the Jonas Brothers bass player, the next day. Hannah and I were leaving for Berkeley after the concert tonight or we would have invited her to stay in our hotel.

We were stuck in a traffic jam for hours but finally arrived at her hotel, dropped off her suitcase and headed to the Grove LA for an Honor Society meet and greet.

Tonight was an ending of the concerts. You could feel it in the energy of the band. It is the end of the whirlwind, the interviews, the national TV show events and the end of concerts in a town that is one of their homes, Los Angeles, California.

Berkeley is the true last concert but tonight was a celebration of the whole tour and all of the people who had supported Nick in making this dream come true.

I have to bring up the alien story. At every concert, Nick was trying to fill some of the time with a conversation on stage. He used joke books and now this alien story. He wondered why the audience didn’t really react when he said he met an alien. Okay, I want a show of hands. How many of you secretly believe that maybe there is life on other planets or galaxies. “It could happen.” (quote from Angels in the Outfield)

All we really want to hear about is his day. He doesn’t need to be funny. I want to tell Nick to let go of the joke books and the alien stories and tell us about the details of his day. Talk about the Jay Leno show experience or what you had for breakfast! Be yourself and share the day to day stuff. That is all we really want to know. 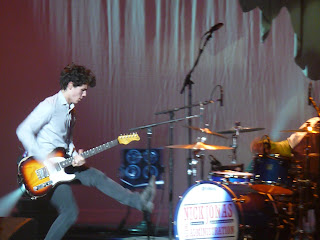 On this last night, I was on the aisle seat. Section 3. Row 1. Across the aisle, right next to me were JONAS stars Nicole Andersen and Chelsea Staub and Chelsea’s friend who is a musician.  Their friends and TV stars were coming all night long. Security had to sit next to them and shoo people away all night. The picture taking was out of control. 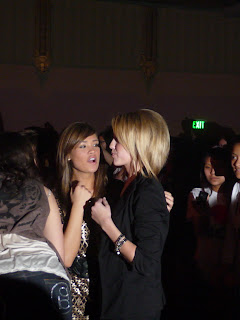 Chelsea and her friend, the musician (I will look for her name) 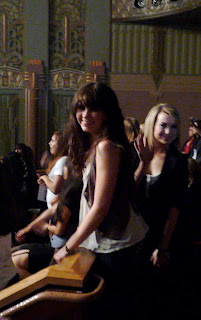 Joe and Kevin and Nick and Frankie came on stage together. This is perfect. They are all here in Los Angeles getting ready for the Grammy;’s and then the filming of JONAS, their TV show. 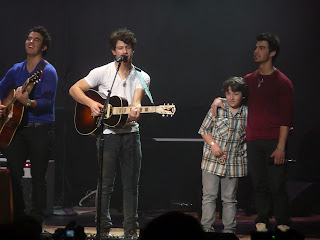 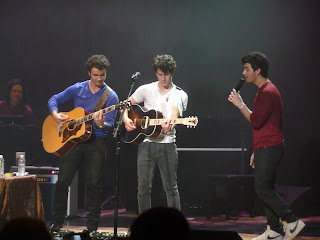 Singing their songs together and Nick’s songs. It was fantastic!

Here is a video of them singing Who I am. Sound is a little rough. Hannah was so close to the speakers, it was hard to record this. I love how Joe didn’t know all the words and they improvised some of this. A glimpse into how a show comes together. They were all so happy. It was a great way to end the tour in LA.

After the concert, we drove to Fresno for the night. Halfway to Berkeley and ready to celebrate Hannah’s 17th birthday and the last concert of the tour.
*******
FYI: My Food places for four days:

Coffee Bean and Tea Leaf- free wireless, great direct trade coffee and food, a place to connect with Jonas fans. A haven from the rain.

Jamba Juice for a carrot juice with a shot of wheatgrass juice.

Ralph’s grocery store for after the show sandwiches and sushi and snacks.