Cheering Each Other On to Victory

Posted on June 4, 2013 by Andrea Hylen Leave a comment 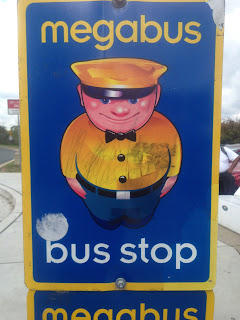 I was in NYC waiting in the standing room only line in the hope of trading in my bus ticket and catching an earlier Megabus back to Baltimore. To pass the time, I was watching people board the bus to Boston while keeping my fingers crossed that the gray clouds gathering in the sky would not turn into a thunderstorm.

The crowd of people boarding the Boston-bound bus had dwindled down to three people; a young woman in her 20’s and two Megabus employees all looking in the same direction, as if waiting for something to happen.

As I watched the scenario in front of me, I saw that the woman was asking, motivating and persuading the employees to postpone departing until her friend made it to the bus. The woman was pointing at her phone and then pointing down the street as if to prove that, “She is on her way, arriving any minute, don’t leave without her!”

I found myself swept up in the moment, looking off into the distance, hoping to see a glimpse of the woman, then looking back to make sure the bus did not leave. My body began to tense with anticipation, as I heard the bus driver start the engine of the bus. Like watching the quarterback in a football game throwing the ball and waiting to see if someone would catch it and run to the end zone for a touchdown, I was holding my breath, silently cheering for the moment we would see the woman appear in the crowd.

And there she was! I saw a woman burst through the crowd, carrying a duffel bag and running from a block away. I jumped into the air with excitement, clapping my hands. I saw the woman by the bus pointing and a Megabus employee signaling to the bus driver that one more person was on her way. Breathlessly arriving at the bus, the duffel bag was handed off to an employee, the two women had a quick embrace then boarded the bus.

I was so happy! I had witnessed a moment between two women that had ended in a victory for both of them. I had tears of joy in my eyes, as I felt the power of women supporting each other. Using their voices and standing up for each other. Supporting with love and conviction.

It could have been a young woman sitting on the inside of the bus fuming because her friend was late. “Oh, she is always late. I hope we leave without her. This will teach her a lesson.” The bus would have driven right past the woman leaving her behind in NYC. I might have seen the woman standing at the side of the road, watching the bus drive by, her shoulders slumped and a duffel bag dropped onto the sidewalk. I might have felt a heaviness in my heart as I watched her, not even aware that there was a woman gloating on the inside of the bus. Being left behind and gloating would have been a defeat for both women.

I am grateful to say that I see more of the cheering these days. I am grateful to be a part of women’s circles where we are listening to each other, healing our stories together, carving new pathways that give us the experience of women cheering each other on to victory. Inspiring each other to have a VOICE in the world. Reaching our hands out to encourage, support, listen, and celebrate each other into a fuller expression of who we really are.

The time is now! Who are YOU cheering on to Victory? And notice…who is cheering for you?

Andrea Hylen is the Founder of Heal My Voice. The mission is to empower women to heal a story, reclaim personal power and inner authority and step into greater leadership. For information on current Heal My Voice projects with women supporting each other in the 9-month process of writing, speaking and leadership in an on-line community, go to www.healmyvoice.org