Posted on March 6, 2010 by Andrea Hylen Leave a comment

By arriving early, we had six or seven hours to hang out and explore. Berkeley was a place I had read about for years. I had always wanted to hang out there.  It was a dream come true to be here!

It was gorgeous, sunny weather and there was lots of time to walk and explore the city. The street vendors brought back memories of being 13 again. Same jewelry: leather hair pieces, shell jewelry, metal chokers with beads. Was time standing still or was it a turn on the wheel? The same fashions from the 60’s and 70″s back in fashion again!

In my exploration of the town, I found a restaurant called Indian Palace with a buffet of Indian food; a coffee shop in one of the buildings on campus; and a study hall in the student union area with a diverse group of students, homeless people and Jonas fans. It felt like this was a community where anyone could be anything they want to be. We were all welcomed onto campus.

I saw so many people I had met at Jonas Brothers concerts over the last two years. I ran into Mikey and Michael from the Verizon Wireless recording studio on wheels.  I hadn’t seen them since last August when they joined another music tour. Nick had requested the studio bus for the day in Berkeley. He had been writing music during this tour. Maybe he was recording the song Stay that he first introduced in DC a few weeks ago.

I can’t remember the names of everyone I saw in Berkeley, but there were conversations, hugs and memories and connections. I met some new people and we shared our passion for Nick and the Jonas Brothers and the Administration.

Hannah tweeted a ticket request for me on twitter. I did not have a ticket when we arrived and the box office didn’t have tickets yet. She found someone who sold us a ticket for $20. Thanks to the Jonas fan with the extra ticket!

The venue was really cool. It reminded me of the Meyerhoff in Baltimore where the Symphony orchestra plays. There were tiered seats on either side leading up to the balcony areas. I always felt like royalty when we attended the school programs at the Meyerhoff. Susan Gardener, a friend, would arrange for group seats for the home schoolers and we would sit in the tiered seats.

My seat at this concert was all the way at the top. When I arrived at my seat, there were two girls sitting together. One of them was in my seat. I recognized them because I met them earlier in the day.  They wanted to sit together and asked if I would switch seats with one of them. Of course! I was more than willing to do that. I gave one of the girls my ticket and she gave me hers.

The usher helped me find the seat. Well, surprise, surprise! Her seat was 15 rows closer and in one of the tiers. What a gift! The seat was at the beginning of a tier and there was no one in front of me! I felt like I was dancing with the band all night. THANK YOU JONAS FAN!

Side view across from my seat. I love the tiered seating! : 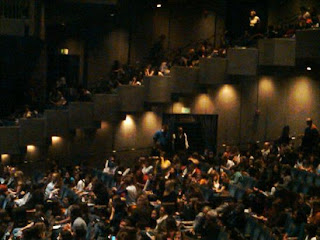 My view of the stage: 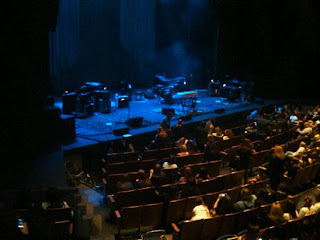 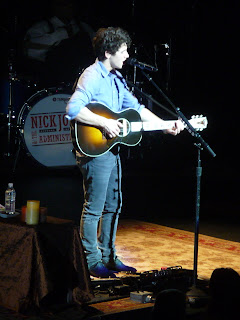 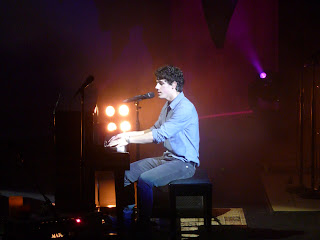 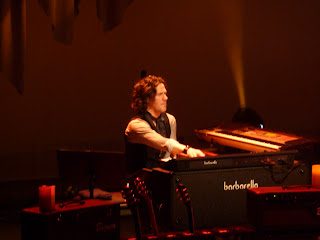 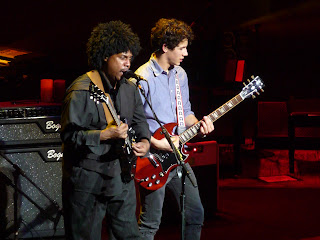 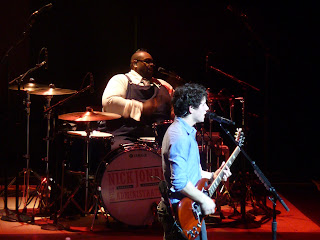 John Fields, bass guitar (music producer for the Jonas Brothers and many others and multi-instrumentalist)- this picture was on Jan 29 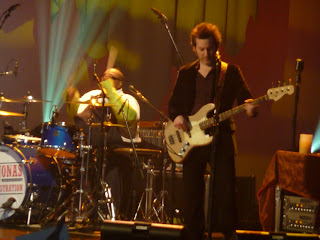 The Administration gathering with NickJ for an official last photo with Rob Hoffman, the Jonas photographer. 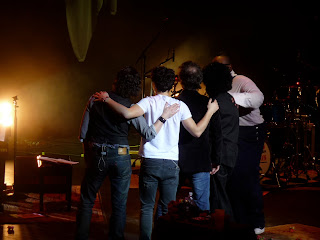 This was the last show of the tour. Here is the difference between this show and the last night in Los Angeles. In Los Angeles, the last night was the celebrity extravaganza. The Jonas Brothers on the stage together. During the week there were stars showing up every night. The Honor Society. The stars of Camp Rock 2, the movie, the Jonas Brothers filmed last fall. The stars from the JONAS TV show. Celebrities and stars and the celebration of this winter tour with family and peers from the entertainment industry.
In Berkeley it was a celebration and closure for NickJ and the Administration band with their fans. They had been on a journey together. It was an evening of warm moments. You could feel the heart connection of the band. They looked at each other and hugged each other as this journey came to an end. They played music from their hearts. They played and joked with each other. They sent love out to the fans.
The concerts were all great on this tour. Tonight you could feel like they were a family at the end of a family vacation or reunion who were saying goodbye to each other, for now. This was a side project for all of them.
I am grateful they took us on this ride with them
Posted in Andrea Hylen, Berkeley, California, Hannah Hylen, Jonas Brothers, jonas watch, Live A Life Worth Celebrating, nick jonas, Open to Inspiration, The Wiltern Theater